A People Betrayed: The Impact of Islamization on the Christian community of Pakistan 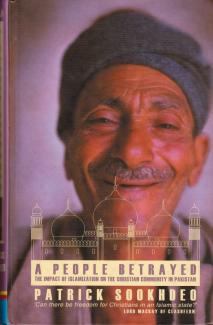 As apparent from the title A People Betrayed is a story of betrayal, broken promises and injustices committed against one people by another. The former are the Christians of Pakistan. The latter, the betrayers are majority Muslim sect, the rulers, the religious elite and the law makers and the law enforcers of Pakistan.  The book is a catalog of historical injustices, social, economic mistreatment, expedient political U-turns as well as premeditated willful acts of systematic marginalization committed against the largest religious minority of Pakistan, the Christians of Pakistan, my people.

These indigenous Pakistani Christians are the sons and daughters of the land, and have contributed in her creation, with the (mistaken) hope that they would be considered its equal citizens. Despite the historical injustices these people continue to consider Pakistan as their rightful homeland, even though they find themselves rejected in their own land and at best tolerated as second class citizens. The perpetrators of these shameful activities and atrocities targeting these vulnerable minority are the members of the majority faith ruling class themselves, who when they were a minority, feared the mistreatment they might suffer after the British Raj’s coming to an end. The systematic narration of the grievances and a scholarly analysis thereof is the subject matter of the book.

The author’s aims include creating awareness about the Christians and their plight in a country which in the international consciousness is almost exclusively associated with Islam.  Very methodically the author first establishes the historical context of Christianity’s presence in India (and present day Pakistan). He begins with the arrival of Thomas (one of the twelve disciples of Lord Jesus) who reached India around 50/60 AD and made earliest converts to Christianity, the spiritual progeny of whom, the “Thomasite Christians” are still thriving in South India. Using various historical, traditional (based on oral traditions), and non-canonical sources i.e., The Acts of Thomas, the author attempts to establish the possible presence of Christians in Northwest of the present Pakistan (present Taxila) during the mid-first century. The discovery of The Taxila Cross (1935) and its adoption as the symbol of the Church of Pakistan in 1971 is discussed in this context.

The fast moving events based on very complex phenomena and the amount of detail might make the work difficult to follow by those not acquainted with the complexities of the subject matter.  This however is deliberate as the author adheres very closely to the academically accepted style of referencing almost everything he states.

The Second major area of discussion is Pakistan’s political landscape starting from its creation in 1947. The vision and promises of Mohammad Ali Jinnah, the Quaid-e-Azam, of and about a secular nation have to successfully all but buried in the tides of time. The final all the way down to the time of General Zia ul Haqq who attempted, many times quiet successfully and Islamised everything and created a very difficult situation for the minorities. Jinnah’s vision was for a secular state in which everybody would be treated equal, as evidenced by his speech of 11 August 1947. The ideological development of the state of Pakistan is well argued by referring to various intellectuals who have contributed to the process. The laws, conditions that need to govern non-Muslims living in a Muslim state (the concept of dhimmitude) is also expounded.

In the sections entitled ‘De facto discrimination against Christians’ and the one  about blasphemy and apostasy, the social, economics well as legal and political  pressures exerted on the Christians are exposed and explained. The legal and social bias used against Christians is clearly demonstrated by the various so called ‘blasphemy cases’ which are listed and discussed. The more prominent of these are those of Denial Scot (the first Christian against whom a case was filed under 295 C), Gul Pervaiz Masih (First Christian to be convicted under the Blasphemy law), Tahir Iqbal (a Muslim convert to Christianity who was the first to be allegedly killed because of a Blasphemy charge), Niamat Ahmar and many others.  In protest, against the pronouncement of death sentence against Ayub Masih, Roman Catholic Bishop John Joseph committed suicide on 6th May 1998 in front of the court.  There are far too many cases detailed in the book to be listed, let alone be commented upon, in this short review. Laws of apostasy regarding Muslims changing their religion are also discussed at some length. Apostasy in Islam is punishable by death. The abuse and misuse of these laws to stir communal violence against Christians was seen in the shameful incident of burning (on 6th February 1997) of the twin Christian villages, Shanti Nagar and Tibba colony.

The book is more than just a compilation of facts, events and cases. It is also an incisive and analytical critique of the root causes of the problems faced by the Pakistani Christians. In the ongoing mistreatment and marginalization of these people, the deeply entrenched and therefore lingering presence of Hindu caste system cannot be overlooked. The role of the missionaries too has had many facets, and Sookhdeo uses very calculated and precise language to describe, (quite accurately in my view), their positive contributions as well as negative influences to the cause of Christians in Pakistan.  The term “Mission Compound” Christians is an example. This phenomenon highlights how some missionaries inadvertently were created a subset of Christians who did not (have to) engage even with the general Pakistani society let alone with its politics. And of course, all along the political forces were gradually, systematically and irrevocably closing in on the freedoms, properties, legal status and economic well being of the community. The Christian political leaders have either suffered from the system’s flaws (like separate electorate system), have been too short sighted or have lacked the political insights and will to prevent the tides that have carried their people further down the socio-economic status.

In the section entitled Christian Responses, the author takes a panoramic and critical look at how the Christians in general and their religious leaders in particular have used the situations wisely or otherwise and the ensuing mess these have created.  He identifies apathy born of self-pity, and missionary influence as well as disunity as the main self-imposed handicaps in dealing with the problems.

A People betrayed is an in-depth root cause analysis and a historical proofs exhibition   of the injustices suffered by the Christians in Pakistan from the time of its creation to the 2002. It is ruthless apportioning of the blames and credits where they are due.  This no holds barred approach in stating facts and drawing unpleasant yet accurate conclusions makes this work worthy of high regard. It also has sections on the way forward like inter-faith dialogue, and raising international awareness of these issues.

The author has painstakingly established the presence of a significant number of Christians in Pakistan; their not-to-be-ignored role in its history, and their significant contributions to the creation and development of Pakistan. They, however, have been betrayed by the state and its various institutions and governments.

This volume is a welcome addition to a handful of serious studies on the subject of Christians in Pakistan. Even though it is well researched, amply referenced (448 references), logically laid out and academically sound, it does betray a polemical passion. And, at least I, as a Christian from Pakistan, cannot fault such a passionate approach, as nearly all other studies on this topic, by Muslims, and a few Christians too, are nothing but a series of rosy myths propagated about the supposedly equal and wonderfully fair treatment that the minorities get in Pakistan. It is to Dr. Sookhdeo’s enduring credit that he has very systematically and successfully exploded this myth, and earned a PhD, as well as, a place of honor in the hearts of people like this reviewer.